Once Upon a Time in the West

Here is a sneak peek at the Program Notes I wrote for the screening of Once Upon a Time in the West at the Dryden Theatre this Sunday, December 27. There's even a film noir connection. If it makes you want to come, the screening starts at 7pm:

Its post-modernity lies almost exclusively in the tenet of self-reflexivity, the ability to recognize that a work lies not outside its history, but is, indeed, a product of it. Sergio Leone, along with Bernardo Bertolucci and Dario Argento, who helped him fashion the treatment for Once Upon a Time in the West, repeatedly watched their favorite old Westerns during the story process, then consciously cribbed and quoted those films to lay the groundwork of familiarity against which the plot of the film would be set. In this way, they honored the conventions of the Westerns of their youth, while using them to deconstruct the Western itself.

The most striking use of this technique is in the casting. Henry Fonda, whose career had featured a long-line of heroic and morally-upright characters, including Abraham Lincoln, Tom Joad, Wyatt Earp, Mister Roberts, JFK, and Teddy Roosevelt, Jr., was cast as the evil, amoral Frank, a fact which was hidden from the audience until after he and his men had massacred an entire family, and just before he gunned down a child. The audience’s expectations for the character, then, were completely shattered, giving Frank full reign to be as brutal as he needed to be.

Also familiar to Western fans was Charles Bronson, who had appeared in Vera Cruz, Jubal, 4 For Texas, and Guns of Diablo. But it was his role as the wood-whittling Bernardo O’Reilly in The Magnificent Seven that made him the perfect choice for the role of Harmonica. What was, in The Magnificent Seven, a sweet and generous gift of music became a totem of revenge in Leone’s film.

Beyond this, there are many scenes or sequences in the film that refer directly or obliquely to previous Westerns. The beginning of the film is similar to that of High Noon, where three men wait for a single passenger at a train station. The person they are waiting for is a bad man named Frank. The massacre of the McBain family at Sweetwater was influenced by a similar sequence in The Searchers, where the Edwards family is setting their places for dinner, as the anticipation of an attack by unseen Indians mounts. The massacre is conducted by five men in dusters, including Frank, much the same way that the stagecoach is robbed by five men in dusters, including Liberty Valance, in The Man Who Shot Liberty Valance.

The funeral scene is borrowed very closely from the Sonewall Torrey funeral scene in Shane. The character of Jill McBain bears close resemblance to that of Joan Crawford’s Vienna in Johnny Guitar, in what Bertolucci called “one of the more explicit references in Once Upon a Time in the West.” Henry Fonda, working the dark side of his personality in Warlock, wears clothes similar to what Frank wears here. His character also kicks a crippled man off his crutches, much as Frank does to Morton near the end of the film. And, of course, the entire concept of the colonization of the West, and the role of the railroad in it, is a common theme in Westerns. Veteran writer Frank Gruber calls it one of the seven basic Western plots. But in Leone’s interpretation, it bears closest resemblance to John Ford’s The Iron Horse and Cecil B. DeMille’s Union Pacific in its affectionate close-ups of the trains.

But the references did not stop at Westerns. Leone pulled from all of film history, including a reference to the final scene of film noir Farewell, My Lovely, in which Marlowe says “She made good coffee, anyway,” echoing ’s views on the beverage. In the gangster film Murder, Inc., there is a shot of someone taking over the strop and razor from an Italian barber, as seen in this film. And Frank’s line “How can you trust a man that wears both a belt and suspenders. Man can’t even trust his own pants!” is taken almost verbatim from Billy Wilder’s Ace in the Hole. And even beyond film, Bertolucci claims that Brett McBain’s name is a combination of crime writers Brett Halliday and Ed McBain.

Jorge Luis Borges once wrote that “every writer creates his own precursors.” Filmmakers are no different. Rarely are they as apparent in Once Upon a Time in the West, but we all live with a collective past, a collective memory, that exists to shape our perception of what is to come. Whether what is to come agrees with or contradicts what has passed is the choice of the artist.

How do you fit this under the tree?
Posted by Jared at 7:00 AM No comments:

The first one I came upon:

Well, you may have noticed that I haven't been around here much lately. I've been working pretty hard on the Film Noir series I curated for this January and February. Introductions for 9 of the films, and 8 sets of program notes take some extra time. Also, we've been finishing work on the family room in preparation for the holidays. Which is too bad, because if you remember from last year, criminals get crazy around the holidays and steal all sorts of weird and funny stuff. I had a series of Crime Beats leading up to Christmas, and in the back of my mind I was hoping to do the same thing this year. Maybe I can get a few up before Friday. Beyond that, I'm working on my favorite reads post, and a list of the movies (not all films) I've watched this year. Enjoy the rest of your year, and remember what we say in my family: Happy, Healthy and Safe.
Posted by Jared at 8:32 AM No comments:

So, there's 11 days till Christmas and you haven't finished (begun?) your shopping. You need help. Inspired by (read: stolen from) Type M For Murder, here are some of my (alphabetical) recommendations for books published in the last 24 months that your gift-receiving friends are sure to love. There's a little something for everybody here, so pick the most appropriate.

Bury Me Deep, by Megan Abbott
Another beautiful, elliptical novel from Megan, based on a true scandalous murder of the Thirties, then taken where Megan wants it to go. There aren't many better than Megan in crime fiction right now, and if you like your novels dark, then Megan is the way to go.

Murder is Binding, by Lorna Barrett
NY Times best-selling cozy from one of Rochester's own. It takes the meta-level lover of mysteries and plops her into a mystery of her own, in a small town with many eccentric peoples. The first of a series that now includes Bookmarked for Death and Bookplate Special.

Hit and Run, by Lawrence Block
The master at work on possibly his last novel. Keller is the likeable hit-man set up for a political assassination and on the run in post-Katrina New Orleans. Fourth in a series that you should read, too, if you haven't already.

For Better, For Murder, by Lisa Bork
The newest Rochester-based crime fiction purveyor starts her "Broken Vows" series with this not-quite-cozy that centers around expensive cars and dead bodies in a Finger Lakes small town. The complex relationship between the protagonist and her "ex-husband" is what draws me to this series.

Trigger City, by Sean Chercover
Sean is awesome. Dark, like his hero Lawrence Block's Matt Scudder novels, but also thoughtful and timely. In this one, our PI Ray Dudgeon is paid to investigate an open-and-shut case that puts him in the crosshairs of a multi-national security firm. Great stuff, and get the first novel, Gi City, Bad Blood, too.

Embrace the Grim Reaper, by Judy Clemens
Full disclosure - I haven't finished this yet, but I'm enjoying the hell out of it. Casey has had a near-death experience, and ever since then she's been having near-Death experiences. Wandering the countryside, the Grim Reaper is her nearly-constant companion. In this, she stumbles onto a recession-induced murder mystery in a small Ohio town. Fantasy or parable, I'm eager to find out.

Frames, by Loren D. Estleman
For the film geek in your life. Valentino is a UCLA film archivist that may have just found the sole remaining print of GREED. Salivating yet? Get it for your film geek friends and watch the drool flow...

Money Shot, by Christa Faust
Ex-porn star Angel Dare starts the novel in the trunk of a car, presumably at her own end, but this is only the start of the novel. Angel finds her way out, discovers who's behind the deed and extracts her revenge. Dark, fast and fun. But what else would a Hard Case Crime book be?

State of the Onion, by Julie Hyzy
Can a White House chef really become embroiled (heh-heh) in an international mystery? Of course she can! A "cozy thriller," this is the first in a (soon-to-be three book) series that follows Ollie Paras through the worlds of diplomatic exactitude, haute cuisine and Sorkin-esque behind-the-scenery.

Good People/The Amateurs, by Marcus Sakey
Holding up the back end of the alphabet all by himself, Marcus is a Chicago-based writer that focuses on the everyman in his thrillers. Not the John McClane Hollywood everyman, but the guy who has moved on from his dark past. Or the guy coming back from the war to a changed neighborhood (noir anyone?). Or, in the case of these two novels, a married couple just trying to have a baby, and a group of friends 10 years too late in finding that this is all there is. They really should be bought and read together as companion pieces (you can e-mail me if you've read them and want to discuss why), but they work very well individually as well.
Posted by Jared at 7:00 AM 3 comments:

Noir Images - Lady in the Lake 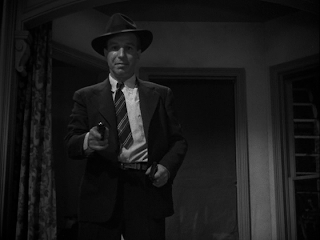 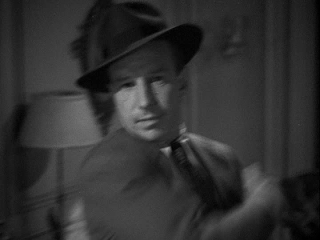 One of the things Philip Marlowe is always doing is getting beat up. And when you have a first-person camera perspective, that means you get beat up to. In this film, it's usually by Lt. DeGarmo (Lloyd Nolan). 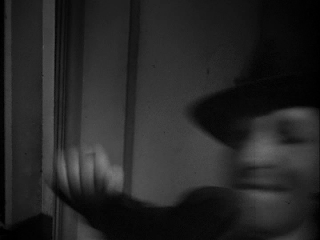 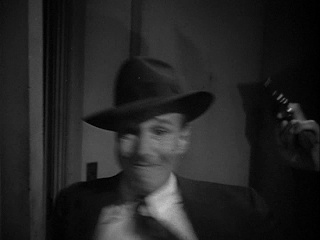 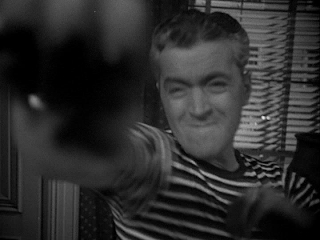 The Death of Method

There is a very interesting article in the Wall Street Journal about the death of method acting. I haven't quite gotten my head around it yet. This feels like something I'd rather talk through, but there's something there. Read it here.
Posted by Jared at 8:40 AM No comments:

All sides get bloody in the final conflict between the Club, the Aryan Brotherhood, Zobelle and the Mayans. I will waiting for the next 39 weeks for Episode 3.1.
Posted by Jared at 7:00 AM No comments:

In the penultimate episode of the season, everything is coming to a head. Jax and Clay are back together, but at what cost? And can Clay pull all the colors together to fight the Aryan Nation, or are the Sons headed for ultimate ruin? Or worse.
Posted by Jared at 7:00 AM No comments: